Introductions to the Dux will have to wait as a large party of Horse Raiders have been sighted. Roman forces have been dispatched with orders to halt the raiders at a ford nearby. A battle report will be posted in due course when messengers run from the battlefield. 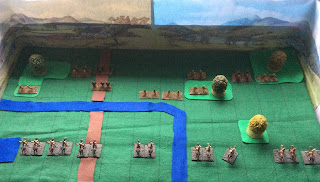 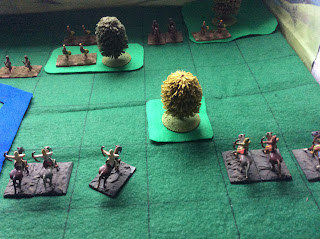 Posted by tradgardmastare at 09:47 4 comments:

This is the Dux Arabiae. His job is to project his patch from Arab raiders, the merchant chappies from the City State and the horse raiders from the Eastern wastes amongst others. The Dux has some skirmishers,light and heavy infantry to help him, not to mention very heavy cavalry. In the wall painting we see the Dux, his Draco bearer and finally his Gallic bodyguard. 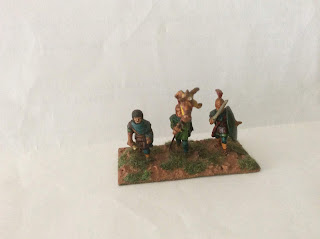 Tomorrow we will hear a little about the Dux’s character and the posting he has just arrived at to take command...

Posted by tradgardmastare at 09:37 2 comments: 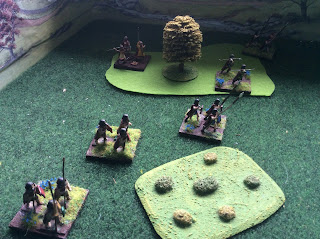 Picts and Romans meet in broken country,who will come out of the encounter best.Wee game using Ross’s Gathering of Hosts rules. 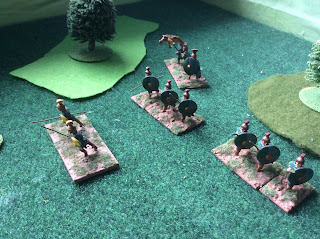 Posted by tradgardmastare at 10:23 2 comments: 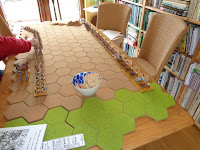 The initial set up (rules used dbm ,having tried over the years to find other mutually acceptable substitutes) and biscuits. 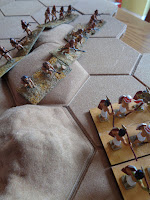 The Libyans soon succumbed to the Egyptian chariots apart from these fellows in rough terrain and their general accompanied by his bodyguard.Their flank collapsed. 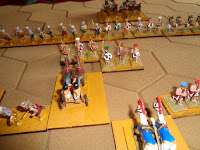 Meanwhile the sword armed Sea people came on and pushed the Egyptians back... 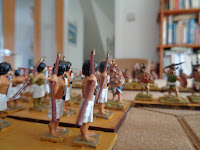 Eventually Pharaoh was harried off the table as his men failed to stem the Sea people tide. The Egyptians tried vainly to get heir right flank across to the left. A draw was agreed upon and the game ended with a handshake. It was fun,not quite as expected but a very close run thing.

Posted by tradgardmastare at 02:50 4 comments:

Here are some Lamming chaps acclimatising themselves to the Duchy- 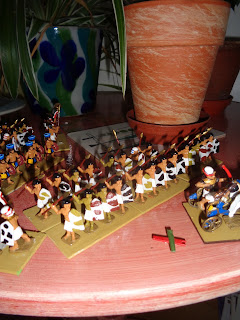 I hoped the plants might make them feel at home...
The scene on the extension tabletop yesterday- 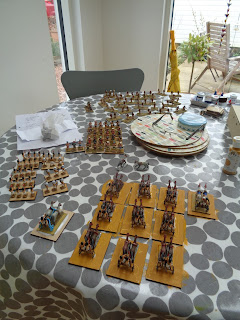 The massed ranks of the Egyptians in the foreground with Minifigs Sea People behind.
I look forward to my first game with these fellows soon.
Posted by tradgardmastare at 03:42 1 comment:

Has it been that long?

Can't believe it's been that long since I posted here! I have succumbed (it being my birthday) to some Lamming New Kingdom Egyptians and chariots this morning- 16 chariots and 108 infantry.Pics when they arrive.

Posted by tradgardmastare at 09:41 6 comments:

HBO's Rome dvd boxed set plus Goldsworthy's "Anthony and Cleopatra" plus Ladybird books equals a wargames project for the dark winter Northern European evenings!
What could be better than pyramids , deserts and the exotic sights,sounds and smells of the Orient to warm one after struggling home through the rain and chill?
Now for some research for illustrations of Cesarian Rome infantry- 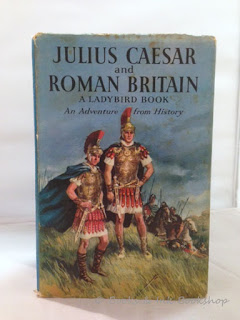 A couple of Roman Generals- ideal inspiration for my version of mark Anthony. I am trying to resist depicting him in a lion pulled chariot.
Now Cleopatra and the Egyptian army- 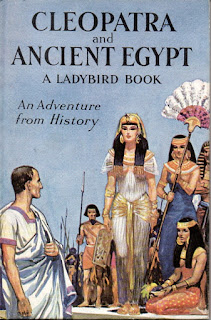 I shall be basing her army and those of her brother on the figure with the spear in the background. So lorica segmentata for the Romans and New Kingdom  for their allies/enemies...
Posted by tradgardmastare at 05:32 4 comments:

Welcome to my ancients blog (yet another one I hear you cry...) ?A genial place to talk about ancient wargaming, a portal on the past,the influences upon my gaming and perhaps an ongoing ancients project...

tradgardmastare
I am a 48 year old in the Education Sector who has been wargaming for around 40 years.....